In 1925, the Louisville Art Association began to offer Children’s Free Art Classes.  The Children between the ages of 8 and 13 were “recommended by their teacher on the basis of their love for and interest in drawings and painting.”  The first time these classes were offered, 200 children can to register for only 30 openings!

During this same period, a group called the Handicraft Guild decided to expand its activities to include a school and change their name to Art Center of Louisville. “The JLL affiliated itself with the Art Center ins 1931, rendering invaluable volunteer work in the gallery, the office, the garden and the library, and in raising scholarship funds and transporting handicapped students to class.”

In 1942, these two groups merged to become the Art Center Association.  The Children’s Free Art Classes popularity had continued to expand.  Another important step to encourage young artist was made in 1950 when the League partnered with the Children’s Free Art Classes committee to create to create a Junior Art Gallery.  The gallery would be “a p[lace where beautiful things adapted to children’s interest could be seen.”  The chose location was the third floor of the Louisville Free public Library.

Through the years, there where many changes to the programs.  The Junior Art Gallery became known as the Louisville Art Gallery while the Art Center eventually became part of the Allen R. Hite Art Institute at the University of Louisville.  The Art Center Association was reborn in 1974 with the original focus of community awareness and free art classes for children.  This group has developed into the Louisville Visual Art Association and 90 years later continues to oversee the Children’s Free Art Classes.

The JLL continued their relationship by providing more than $45,000 to the Junior Art Gallery over the seventeen years as well as hosting several exhibits during the 1970s at the then newly renovated Stairways.  In 1990, JLL Collaborated with the LVAA in launching ‘Open Doors.’  ‘Open Doors’ was developed by an art therapy intern as an outreach program for individuals with special needs.  the program “opens the door to a whole new world of expression, stimulation and self growth for special needs and at risk individuals.  Through the efforts of the League League Member heather Graff, the League provided $24,000 over three years to provide material and art therapist as well as volunteers to assist the therapist and participate in studio activities.  The League also worked to develop an audience for the program.  The program has grown to serve more than 1,200 participants annually and has touched the lives of some of our communities most undeserved while bringing new insights about learning to both students and teachers.” 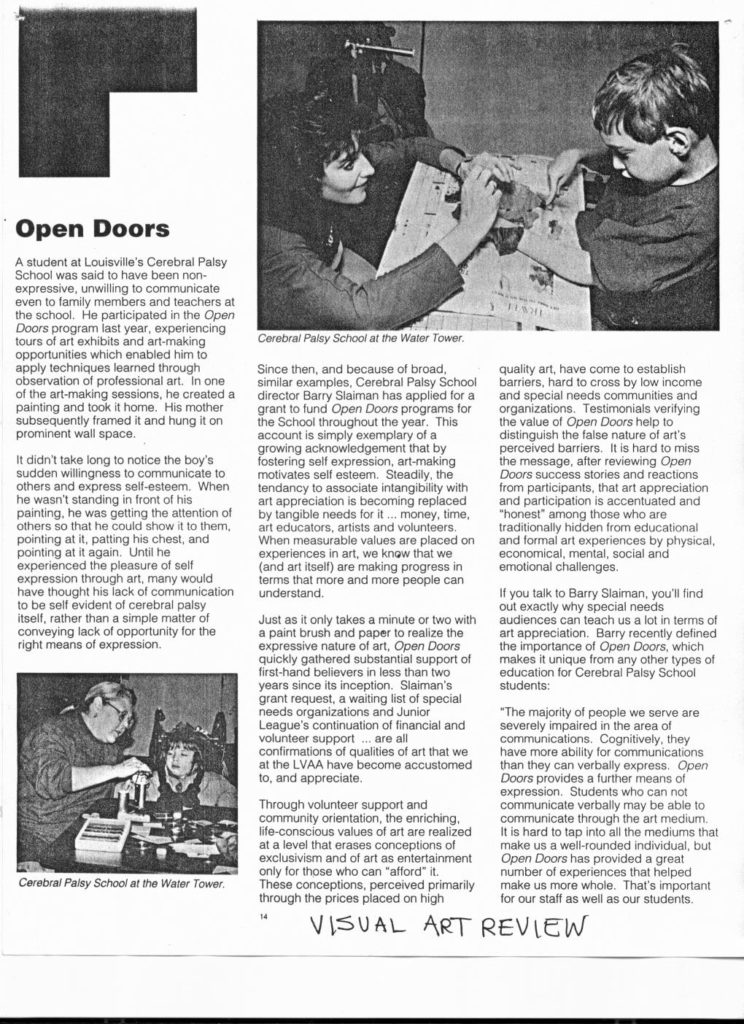 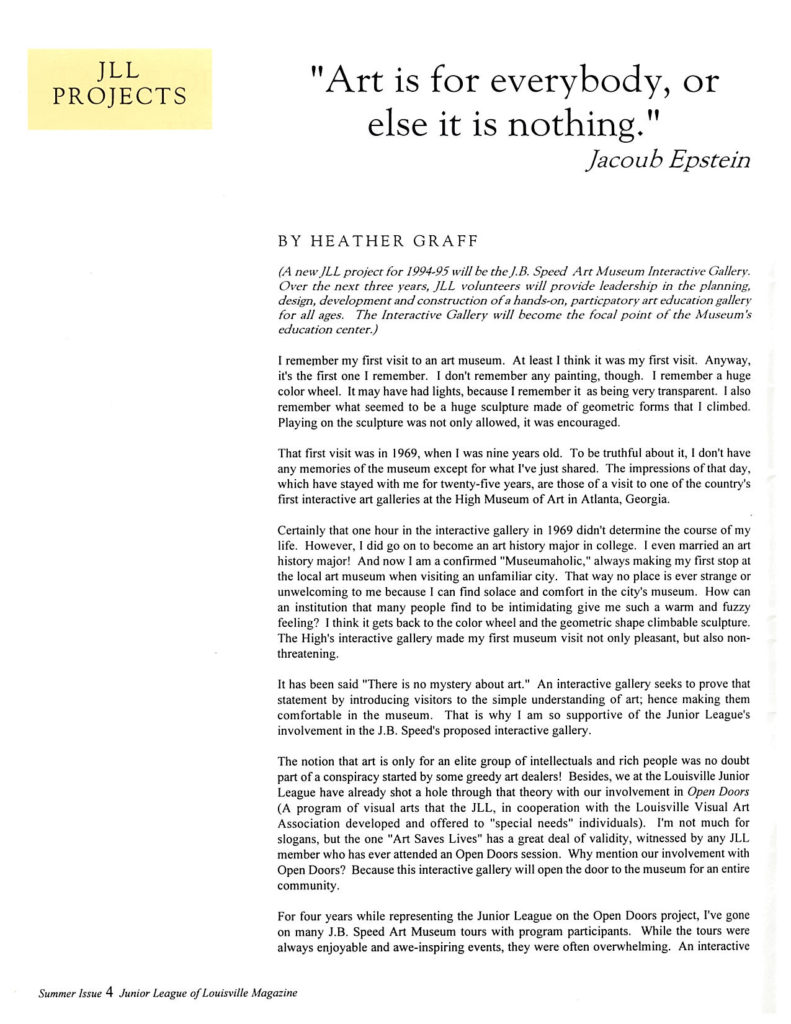 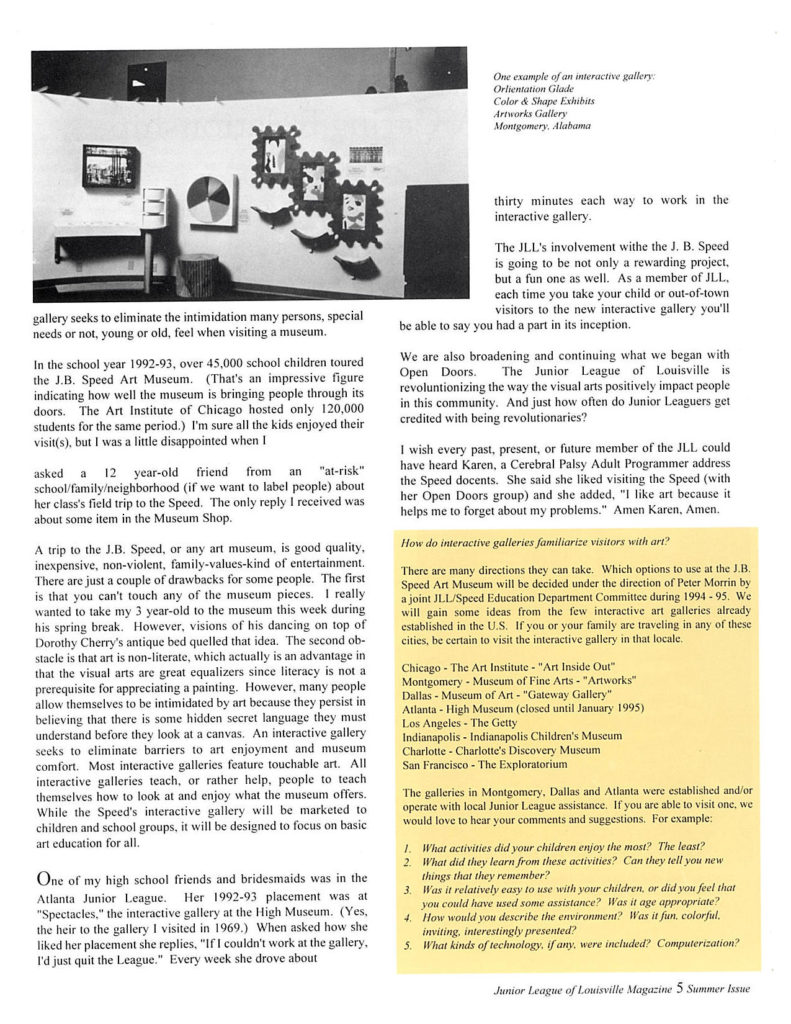 Junior League of Louisville is an organization of women committed to promoting voluntarism, to developing the potential of women, and to improving the community through the effective action and leadership of trained volunteers. Its purpose is exclusively educational and charitable.

The Junior League of Louisville embraces women of various backgrounds through acceptance of individual experiences and encourages growth through our mission.

By continuing to use the site, you agree to the use of cookies. more information